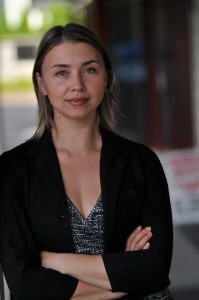 Olga Shcherbyna is the Founder of and Senior Consultant at Diversity Clues Consulting Inc. Mrs. Shcherbyna’s core expertise includes project management, social policy development and “best practice” research. Olga Scherbina has a favourite quote by M. Gandi: “Be the change you want to see in the world.” It’s a saying that has inspired her approach to problem solving and one she incorporates while working with multiple stakeholders in the field of immigrant labour market integration.

Since her arrival to Canada in 2001 Mrs. Shcherbyna has been a dynamic member in immigrant community in BC. Through her volunteer and paid work she actively advocated for changes in the way immigrant credentials and experiences are recognized by Canadian and BC’s government, professional associations and employer community in the province.

Mrs. Shcherbyna holds a Honours Bachelor Degree in Economics from Odessa State University of Economics (OSUE, 1998, Odessa, Ukraine), Honour Certificate in Human Resources Management (BCIT, 2004, Burnaby, BC) and Career Development Practitioner Certificate (Douglas College, 2003, New Westminster, BC). Most recently she received Masters Degree in Social Planning from the School of Community and Regional Planning, UBC. Her thesis research focused on  evaluating the the definition of success and identifying success factors for multis-takeholder collaborations aimed to bring about social change.

At Diversity Clues, Mrs. Shcherbyna has leadership responsibility for managing a number of project-based and research initiatves aimed to address systematic barriers immigrants face in Canadian labour market.
For the last ten years Olga Shcherbyna has been working with immigrant and business organizations to develop new innovative ways to improve immigrant economic and social integration into Canadian society. Among other projects, Olga initiated and managed the development of the first in BC Cultural Competency Toolkit for HR professionals in 2009 and coordinated the first in Metro Vancouver Civic Engagement Initiative for Immigrants (2008). As a consultant, Olga worked with BC HRMA, City of Coquitlam, City of Richmond, Immigrant Employment Council of BC and other organizations. Olga holds M.Sc. in Planning from UBC where her research focused on identifying success factors for multi-stakeholder collaborations such as TRIEC.