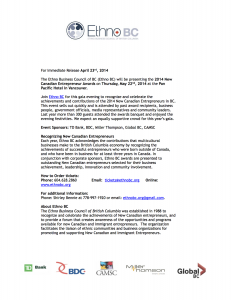 The Ethno Business Council of BC (Ethno BC) will be presenting the 2014 New Canadian Entrepreneur Awards on Thursday, May 22nd, 2014 at the Pan Pacific Hotel in Vancouver.

Join Ethno BC for this gala evening to recognize and celebrate the achievements and contributions of the 2014 New Canadian Entrepreneurs in BC. This event sells out quickly and is attended by past award recipients, business people, government officials, media representatives and community leaders. Last year more than 300 guests attended the awards banquet and enjoyed the evening festivities. We expect an equally supportive crowd for this year’s gala.

Each year, Ethno BC acknowledges the contributions that multicultural businesses make to the British Columbia economy by recognizing the achievements of successful entrepreneurs who were born outside of Canada, and who have been in business for at least three years in Canada. In conjunction with corporate sponsors, Ethno BC awards are presented to outstanding New Canadian entrepreneurs selected for their business achievement, leadership, innovation and community involvement.

Olga Shcherbyna is a member of the Ethno BC Council.