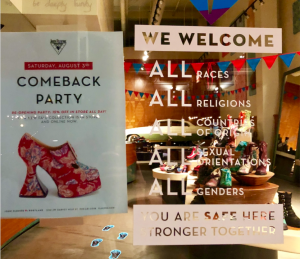 What comes to mind when somebody talks about Portland? My image of Portland was largely shaped by my avid-travelers-friends who painted it as a hipster city where two key attractions are [based on their pictures] the “Keep Portland Weird” sign and a famous Voodoo Doughnut’s place with its trademarked motto: “The magic is in the hole”. This summer, I finally visited Portland and had a chance to enjoy this green mega of microbreweries, food carts and cool shoes stores.

Before coming to the City of Roses [they have ideal conditions for growing roses], I did a bit of digging to find my own cool places to visit. During my research, I had also learnt that Portland was established almost two centuries ago and got its name as a result of a coin-flipping-accident in 1845 between two early settlers. The choice was between Portland and Boston but, thankfully, Portland ‘landed on the top’.

Now, who has not heard about Portlandia? For years, this satire TV show has poked fun at Portland’s liberal culture obsessed with organic food and the DIY movement. So, Portland has become another synonym for fun and corky in my vocabulary. Yet, after visiting it, I have discovered a new side of this town.

You Are Safe Here

Did you know that Portland is one of the whitest cities in the US with over 75% of white population? It is actually a thing and while a number of immigrants and other-race-nationalities is slowly increasing in Oregon, three out of four Portlandersare white.

After the elections in 2016, as the number of hate crimes started to go up across the nation, two Portland’s retailers decided to fight hate and promote inclusion in city’s public places by showing their support for marginalized people. With this idea in mind they created the “YOU ARE SAFE HERE” posters across the city that welcome “all races, all religions, all countries of origin, all sexual orientations, and all genders”.

The first 200 posters were printed in 2016 and the movement, promoting inclusion in the city, has quickly spread with other businesses in the core of the city. Soon, businesses in other cities were also requesting posters. Three years later, one can find these colourful, playful signs everywhere. We saw them on city’s trams, in local shops and restaurants.

While other North American cities have participated in similar initiatives (think Safe Harbour, for example, a program that was established in Vancouver, B.C.), what is unique about Portland’s case is that it is truly a grass-root movement initiated by businesses for businesses. It is also a tribute to Portland’s funky DIY culture, i.e. each poster is printed by hand, using old-fashioned letterpress.

What is our role in building inclusive Canada?

This year, on October 21st, we will vote for political leadership that will shape future policy directions and public spending in Canada. While race has been a factor in upcoming elections, with Trudeau’s brownface photos, the issue of race and white privilege has moved to forefront of media and public discourse.

Not one day goes by without a new article about the photos and what they represent, fueling a new wave of social media outcry. Thankfully, some social justice activists saw it as an opportunity of “not letting the good crisis go to waste” and elevated race discussions from bare political discourse to systemic and societal issues (racialized poverty, Indigenous incarceration rates, the proportion of Indigenous children in foster care, increased hate crime rates and the list goes on).

The crisis we are experiencing as a nation is also a chance for us to reflect not only on what our national leadership stands for but what we, ordinary citizens, do to make our cities, neighbourhoods and workplaces more welcoming and inclusive places for all. I am particularly interested in exploring how we engage businesses to lead initiatives to better our society?

The social purpose movement is on the rise but it rarely enters the race dialogue and we are now presented with an opportunity to reach out to those business leaders who are afraid to touch the race card, lead uncomfortable discussions and engage with media and communities.

I know there are courageous leaders in our business communities. It is my hope that a community project initiated by businesses4businesses [We Welcome All Races posters], in a city with one of the highest proportion of white population in the U.S., will inspire our local business communities to champion their own, made-in-our-city approaches to tackle contentious issues of white privilege, race and inclusion.

All we need are small steps forward.